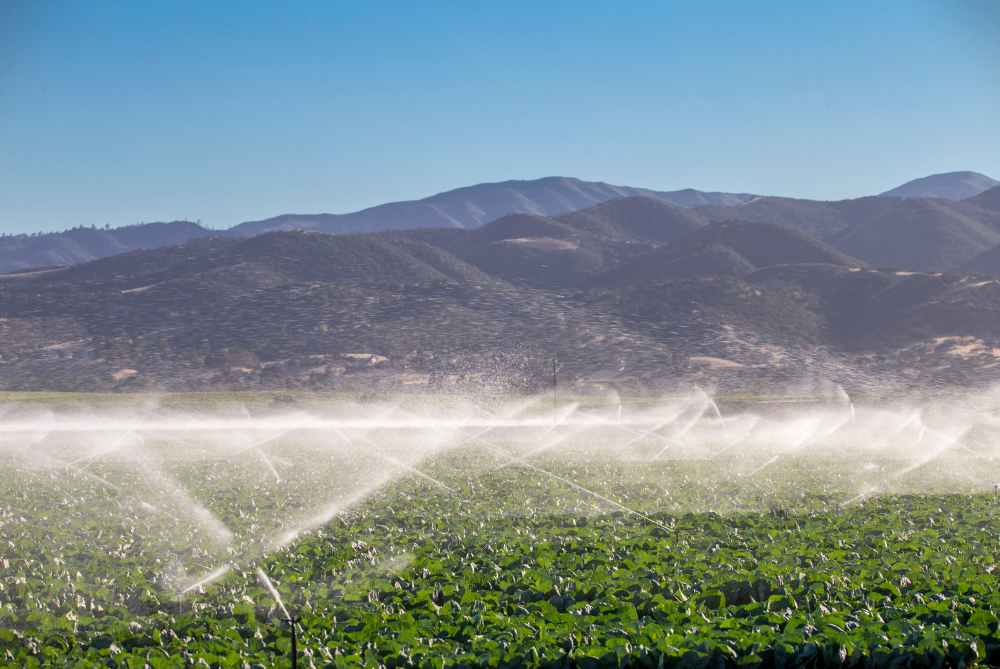 California is a major agricultural center. You may not realize this, but California is known for being the leading producer of more than 74 commodity crops in the United States. That’s according to the California Department of Water Resources, which is tasked with helping the state make better use of its water assets.

With news of drought making regular headlines in the west, it’s becoming all the more vital that California is able to overcome its water challenges.

About 9.6 million acres require irrigation in California now, using approximately 34 million acre-feet of water. This water is enough to cover 31 million football fields with a foot of water, per the California DWR, which says most of the H2O is now being used quite efficiently.

Here, efficiency means, for example, that water that’s not needed on one farm will not be wasted but will be available to use on another farm. Furthermore, water from growing crops also serves to recharge California’s supply of groundwater.

California has a major interest in improving water efficiency. That’s because today, 80% of all water used in the state is designated for agriculture. When the population grows and more people in the cities need water for use in their households and at work, everyone will need to conserve water to make sure there’s enough to meet basic needs.

To that end, agricultural water suppliers that serve more than 25,000 irrigated farm acres are required to submit an Agricultural Water Management Plan (to cover all use except for any recycled water they are using). Farmers need to demonstrate they are using efficient water management practices.

Amid the drought, farmers in California are now resorting to pumping water from aquifers below the ground, at a rate that’s higher than usual, according to National Public Radio. NPR reports that farmers in California will likely pump as many as 7 million acre-feet from wells in 2021. It noted that almond farmer Steve Jackson in Visalia expects to meet 90-95% of crop needs (40,000 acres) will be met with groundwater.

California is on the radar of water-watchers because the state is responsible for meeting about 40% of the country’s nuts, vegetables and fruits. That's why efficient water use and optimization is more important than ever.

Farmers in the San Joaquin Valley (between Bakersfield and Sacramento) may need to reduce their groundwater pumping by 80% by the year 2040, when restrictions are due to be in place. California is rolling out drought-based water reduction requirements over the next 20 years.

Signs That the Drought in California Isn't Always Bad News

Even amid the fierce drought concerns in the Golden State comes some positive news. Rabobank’s RaboResearch head Roland Fumasi explained that sales of almonds actually exceeded industry expectations for the marketing year of 2020-2021.

The blend prices for almonds spans $2.25 to $2.30 per pound, which is much higher than the $1.50 that growers reported receiving for their crops in 2019-2021, according to a report from Farm Progress. Fumasi said that at these prices, most producers should be profitable this year.

Bolstering this good news is a report from California’s Almond Board, which shows almond exports achieved record highs every month (except January) this marketing year. International sales of almonds tipped the scale at more than 2.09 billion pounds, representing a boost of 31% from the year before.

It’s safe to say that managing and controlling the Golden State’s water supply will be an increasingly important issue for investors to keep in mind as they consider adding California Farmland to their portfolio. Investing in California can really be a great opportunity because it truly is the USA star when it comes to food production. California's agricultural abundance includes more than 400 commodities. Over a third of the country's vegetables and two-thirds of the country's fruits and nuts are grown in California. So, try not to let it's water concerns scare you way.

It is simply imperative that you conduct your due diligence. First, make sure that the property has access to at least two different sources of water. For example, ground water and riparian rights. The other key is choosing a partner that is very knowledge about California water and has a successful track record of farming in California. FarmFundr is California Farmer owned. Brandon Silveira, FarmFundr's CEO, has been successfully farming in California for 25 years. Investors can expect the California Farmland Investment opportunities that FarmFundr offers are heavily vetted with ample water in mind, by a farmer who has successfully and profitably farmed through all of California's water challenges.