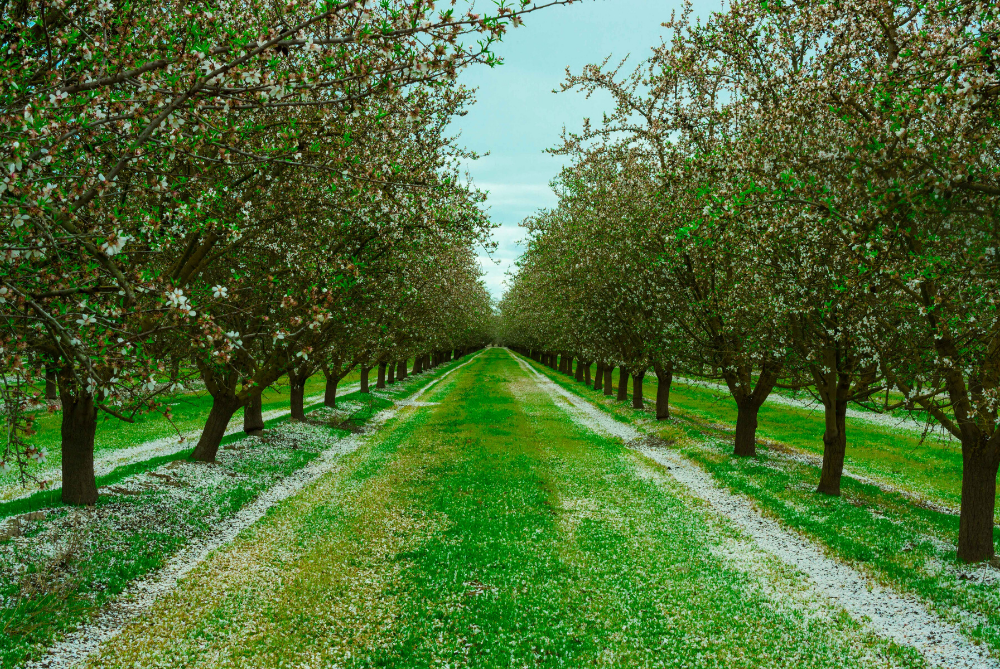 The image at left is a screenshot taken from our new Investor Portal.

The investor portal offers a complete look at all of our current investment properties. Investors can view and upload documents or send questions directly to FarmFundr.

You'll also have access to our offering presentation and property analysis.

The almond orchard is located in Kings County, California, in an area called the Island District. It is located in a highly sought after area that is located between two rivers. The soil is very fertile and is excellent for growing most crops.


The property consists of approximately 19 acres of almond orchard and 1 acre which contains an improved farmstead site, with a dwelling and detached garage, well site and farm avenues. The property is rectangular in shape, with level topography.

This is a very unique variety of Almond tree that does not require bees to pollinate individual blossoms. This saves a considerable amount of money, and boosts profitability on a year-to-year basis.

Irrigation water is provided by the Laguna Irrigation District and one on-site pump and well. The orchard is irrigated by a state of the art irrigation system with individual sprinkler outputs at each tree. This is a highly efficient process for saving money on water, power, fertilizer, and labor.

The Almond Orchard was most recently appraised in 2014 for $600,000, based on continuing use as an irrigated almond orchard with an improved farmstead site, our Manager believes the value has increased since that time based on the sale of comparable parcels in the area.
‍

Since 1970, the average per-person yearly consumption of tree nuts increased from 1.4 pounds to 3.7 pounds. The almond had the most significant growth rate. During that same period, California became the world’s leading almond supplier. In fact, there is no other place in North America where almonds are grown commercially.

In the United States, per capita almond consumption has risen more than 225% since 2005. Over the past 20 years, the amount of land in California that’s dedicated to almonds has doubled to more than 900,000 acres. Almonds are the state’s largest specialty crop export. Eighty percent of the world’s almonds come from California farms, and according to the U.S. Department of Agriculture the global production of almonds reached a record-breaking 1.3 million metric tons in 2018. The price per ton simultaneously reached new highs of $6,807.

The almond industry facilitates more than 100,000 jobs in the state and accounts for $11 billion of California’s gross state product. The total number of almond growers in California is just shy of 7,000 and rising. Even more impressive is the fact that nearly 90% of almond farms in California are family-owned and operated by third and fourth-generation farmers.

Why Invest in Almonds?

What does this all mean, though? If you’re an investor with medium- to long-term time horizons, the almond industry presents an interesting and potentially very profitable opportunity. Almonds have extremely low risks and high rewards.

Consider these reasons why almonds could be a viable investment class within the farmland category. In 2018, the global almond market was valued at more than $6.1 billion and is expected to grow to $9 billion by the end of 2025. This increase amounts to a compound annual growth rate of 4.8% over six years.

Further, in December 2019 the first stages of a trade deal between the U.S. and China were put into motion. One component of the agreement is China’s purchase of $40–$50 billion worth of U.S. farm products. Over the past 10 years, China’s almond imports have increased more than 20% per year. Considering the fact that China also only represents about 10% of California’s total annual almond shipments, the outlook for the future of this market couldn’t be brighter.

The impressive investment potential of the almond market isn’t just limited to profits from the sale of the actual nuts, either. According to Agri Investor, undeveloped arable land in California’s Central Valley – where the land, climate, and environmental conditions are best suited for growing almond trees – carries a price tag of about $5,000–$6,000 per acre whereas developed land that’s already producing almonds has an average value of $20,000–$30,000 per acre.

The Future of the Almond Industry

Further indicators of the strength, viability, and long-term profit potential of the almond industry are evidenced by the Almond Board of California’s $5.9 million investment to facilitate extensive research & development efforts. According to ABC, there are as many as 85 independent research projects, collectively referred to as “The Almond Orchard 2025 Goals Roadmap.”

According to the Wall Street Journal, “almonds are shaping up to be a more lucrative endeavor for pension funds, endowments and other institutions with very long-term investment horizons.” One such institution is Harvard University, which has been buying and selling farmland and almond investment properties for several years. From 2019 through 2028, the almond industry is expected to generate a compound annual growth rate of 7.1%.

Innova Market Insights reported that “almonds are the most popular nut in new product introductions across Europe for the fourth consecutive year.” The meteoric rise in popularity over the past several years is due to their versatility and ability to serve as an alternative to consumers with dietary restrictions involving traditional dairy products.

Getting Started With Almonds as an Investment

Recognizing the massive potential of the almond market is the easy part – figuring out how to capitalize and turn that potential into financial gains, however, isn’t so easy for the uninitiated investor. There is indeed a plethora of opportunity in the almond business, but the industry is extremely complex and requires the assistance of a trusted and experienced advisor. There are a lot of ways to make money with agriculture, but the best results come from having the best opportunities, and only an experienced industry professional can provide those.

When it comes to investing in almonds, you could seek out undeveloped land in California’s Central Valley, and hopefully negotiate a fair price for some arable acreage. Then you could spend even more money to upgrade the land and make it ready for an almond orchard, plant some almond trees, and wait four or five years for them to bear fruit. While you wait, you could attempt to learn as much as possible about the almond industry and your competition, and hope that you’re able to harvest enough nuts to begin offsetting your initial financial outlay. Hopefully, if you’re lucky, it won’t take more than a few more years after that for your orchard to finally come close to climbing back into the black…

Or, if you don’t really have a desire to become a farmer but just want in on the action in the almond market, you can opt instead for a more focused agricultural investment vehicle. There are traditional options like exchange traded funds, but those aren’t much different from any other security. Perhaps the most fulfilling option for investing in agriculture or, more specifically, almonds in this case is a crowdfunding opportunity.

If you’re not familiar with crowdfunded agriculture investments, you can learn more by reading the Ultimate Guide to Investing in Farmland. Crowdfunding is a way for investors to generate profits with farmland, but the process is much more personal and tangible than other investment types.

For example, one of FarmFundr’s currently available opportunities is an almond orchard in California. Located between two rivers in an area of Kings County called the Island District, a five-year-old almond orchard is just now reaching peak maturity. What’s more, the type of almonds in this orchard do not need bees to pollinate their blossoms.

No corners were cut and no expenses were spared in the creation and development of this orchard. Cutting-edge irrigation equipment and modern technology ensure this orchard will remain highly efficient and have maximum production at each tree.

Last year, this orchard produced almost 9% more almonds than anticipated, with a sales price that was 6% higher than originally estimated. Current projections and estimates show the orchard is on track to generate an expected IRR of 13.30%.

Additional information about the almond orchard, including fact sheets, disclosures, and even high-resolution photographs of the operation, can be found here. Also, for at least the next few weeks FarmFundr has reduced the minimum initial investment in the almond orchard by 50%, so there has never been a better time to get involved.

Final Thoughts on Investing in Almonds

Generally speaking, farmland investments have been profitable, with average returns at almost 12% since the Great Depression. Considering both the national and global market outlook for farmland and, more specifically, the almond segment, there is little to no indication that those positive returns are in danger of changing course.

The sheer volume of almonds produced and consumed across the globe is staggering. Arable land is becoming scarcer with each passing year, yet the demand for almonds shows no signs of slowing. This presents a potentially lucrative opportunity for investors well-positioned in the almond sector.